Constructing the hydrogen gas saver is only the first step in the right direction, but without a proper tuning to the car the it is impossible to really increase the internal combustion engine efficiency. Tuning the car’s injection system or the carburetor is our next mission.

So what to do increase the internal combustion engine efficiency ?

In order to really start saving fuel and reduce emissions we need to make the engine to work in lean regime (less fuel per cycle). This mode is only possible thanks to the hydrogen booster we described earlier.

if we just increase the amount of air in the mixture the engine will run hotter, but if we replace some of the air with Hydrogen/Oxygen mixture from the booster the combustion running temperature will actually go down while the engine converting more chemical energy into motion instead of heat, in other words increased efficiency. Important Note: Do not try to lean engine’s work without fuel saving device such as hydrogen gas saver, this could hurt the engine due to over-heating.

The obstacle: Oxygen sensor - the Oxygen sensor helps the car computer to adjust the gasoline to air ratio to the wanted value of 14.7 to 1. It is done by measuring the Oxygen value at the exhaust pipe. Oxygen level reading below the defined optimum means that the car using too much fuel. In that case car’s computer compensates by injecting less fuel from now on. Oxygen level above optimum means the car is using less fuel than required and the computer will order to increase the fuel injection.

When a Hydrogen booster is in use, part of the air in the engine is replaced by Hydrogen-Oxygen mix. Naturally more oxygen will remain after the burn compared to the original state. The Oxygen sensor will show increased level of Oxygen in the exhaust and the computer will try to compensate by injecting more fuel and ruin any increase in efficiency we got by using the booster.

In order to save fuel a change in the oxygen sensor signal is needed.

The web is full in hydrogen boosters for sale - they are worthless without a method for changing the fuel / air ratio.

In my experience, the most effective two ways for making the engine work lean are those:

The most accurate way, that works in all situations is the

adjusting the signal from the oxygen sensor to change the

fuel / air ration in the burning process. More in the HHO EFIE page

metal part called “Spacer”. The spacer connects between the oxygen

contact with the exhaust emissions. In result, the oxygen sensor “feels”

less oxygen and less fuel injected during the burning. This method isn’t

very low price it is worth a try. Read more in the “Spacer” page

Generally, it is easier to tune a carburetor to work lean. As easy as turning couple of bolts. But since I never tried to pull this out, I cannot give you complete picture of the process.

From talks with people I got the impression that a car with a carburetor can get very high MPG, maybe ever higher than injection cars. I am eager to try out this issue, and soon I getting a test car with carburetor for experiments. Stay tuned for updates. 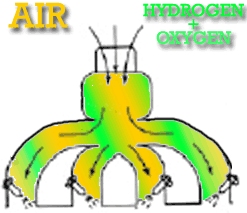 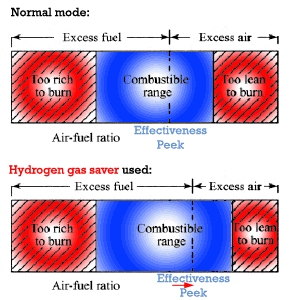 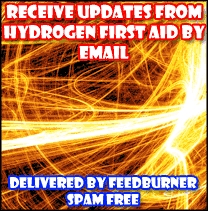